These days the European Union appears increasingly at loggerheads with America and Britain. And events in late May as well as in early June apparently only made things worse.

The UK-EU Split Gets Messier

In April, Conservative Prime minister Theresa May called for a British snap election to be held in June 8, 2017. The earlier than expected election seemed like a safe bet at the time. But now the world knows it ended badly for the prime minister and her party.

“Ms. May called this election to boost her parliamentary majority and strengthen her Brexit negotiating hand — talks begin in 11 days.

But this election result may have given extra power to the pro-EU MPs within her own party.”

“This result will also undoubtedly embolden some in the European Union, who think the UK’s bargaining position is now much weaker than it was before this campaign began.”

The Brexit negotiations were scheduled to start Monday, June 19, 2017. At this point, they are expected to begin either on that date or, at the most, a few days later. 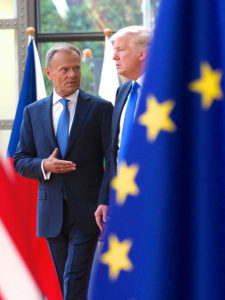 The American president’s first overseas trip is now one for the history books. To many observers, the second part of the trip did not go nearly as well as his visit in the Middle East.

To briefly recap, in Europe the president stopped first at the Vatican, in Brussels for multiple meetings with European leaders, and then went to Sicily for the May 26-27, 2017 G7 summit.

Six of the G7 leaders — from Canada, France, Germany, Italy, Japan, and the UK — reaffirmed the Paris climate accord at the G7 Summit; but the American president chose not to do so then or after his return to the White House.

Both actions, along with other statements made both in Brussels and Sicily, irked the Europeans and had several leaders rethinking their alliances.

After the president’s trip, DW News published an article, on May 28th, with the headline, “ Merkel: Europe can no longer rely on US and Britain.” The subheading read,

Related article, “America, Not the Best of Times”
Other European News

This world does not reflect the nature of a loving God. The relationship between the Creator and His creation has been broken. This condition has a limited allotment of time before God moves to restore all things to Himself. The Church of God, through this website, seeks to support those whom the Father calls to come into a restored relationship with Himself through His Son, Jesus Christ. … END_OF_DOCUMENT_TOKEN_TO_BE_REPLACED